skip to main | skip to sidebar

My husband (an elementary school teacher) and I are often concerned when we see how many children have lost the ability to be creative, use their imaginations and think outside the box.  In fact, I just read a good book that mentions how society and the media have played a pivotal role in that decrease of creative play.  One example they explained was how cartoons are created, watched by the children and then a plethora of toys from that cartoon are created, heavily marketed (and desired by the kids) and sold, telling the children exactly how to recreate the play found on the cartoon rather than letting the children try to recreate that play on their own.  I found it all very interesting...

Anyway, we try to encourage our children to use their imaginations as much as possible (I remember how vivid and enjoyable my imagination play was) and have tried to have a "no video game" policy for our home.  Our oldest is only 4 so this has been relatively easy so far since Leapfrog's Leapster is about the only system out there marketed for his age, but I'm sure we're going to run up against some struggles as he hits the preteen and teen years.  I'm not trying to be on a soapbox, so please don't feel judged if your child loves their video games, and I can definitely see how some video games (ex. Wii games) could make for super fun family time and some are supposed to be very "educational".  Okay, okay, I'll really stop now.


So when I came home from a ladies tea yesterday it made my heart happy when McGee came to me so excited to share "Ben" (our dog) that he had made from some of the large-sized Legos (not the small ones sold in sets that are most popular).  It may not be the most creative thing in the world, he didn't build it from sticks and mud found in the backyard and it does look a bit more like a reindeer or elk than a dog, but I still felt overjoyed that he had worked out of the box and figured out a way (without picture instructions) to CREATE our dog out of Legos. 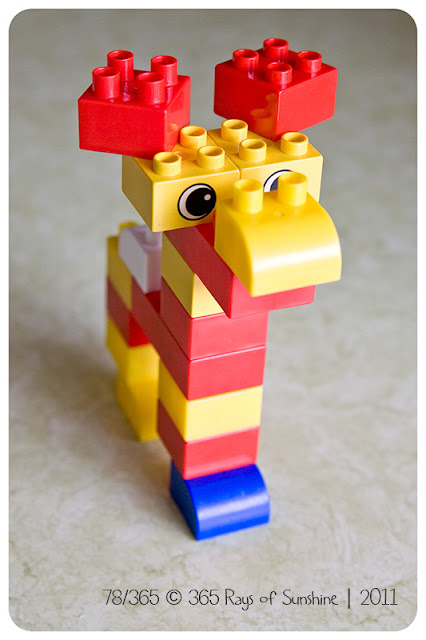 PS:  Don't get me wrong, I'm sure we have plenty of non-imagination producing toys and I do let me kids watch some cartoons, but I still hope we're giving them plenty of room to use their imagination as much as possible.